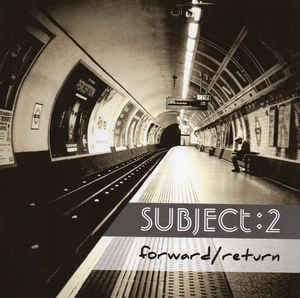 Content: Gary Starky has worked with Vince Clarke and that’s something you can easily notice. “Forward/Return” is a classical electro-pop formation getting back to the early years of the genre and more especially to bands such as Depeche Mode, Erasure, OMD and co. The songs are indeed very inspired by 80s music although there also is something more personal and contemporary running through the album. The songs remain catchy and melodic. One of the most noticeable songs is the cover version of the disco-hit “Feels Like I’m In Love” from Kelly Marie.

+ + + : Subject:2 deals with the most pure format of synth-pop. You sometimes get the impression to hear Depeche Mode and/or Erasure hiding in the body of this album. Originality is far to find, but it however an accomplished and mature production is. Most of the songs have been sung by Gary Starky, but I also like the female backings. The songs bring no surprises, but there are a few outstanding cuts featured. I especially want to mention “Rubber Made”, which sounds hot and danceable.

– – – : If you’re in search of visionary electro-pop formations, you better can avoid Subject:2. I don’t care about good ‘copyists’ and it’s even quite strange to say that the most atypical song of the album (cf. “Better Luck Next Time”) also is the less convincing cut from the list.

Conclusion: “Forward/Return” is a rather ‘classical’ synth-pop album bringing the good-old 80s taste alive and revealing several cool songs. Let’s keep an eye on this band!