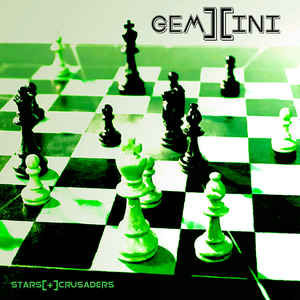 Content: “Gemini” remains a great song in the familiar style of this band. It’s danceable electro-pop music carried by a solid kick, great vocals and a perfect chorus.

The title song has been remixed by Decoded Feedback, Vanguard and the to me unknown Desorden Perfecto. Last, but not least we also get another remix, but this time from the song “The Runner”, which originally appeared on the band’s debut album “New Horizons” and which has been remixed by another less familiar name (cf. Hydrian).

+ + + : “Gemini” was not my absolute favorite song from the album although a right choice as EP-title track. It’s a well-crafted and efficient, powerful electro-pop cut. The charismatic vocals perfectly fit this cool cut. There also is an interesting selection of remixes and I especially like the idea this song has been remixed by Decoded Feedback. It’s not my favorite remix, but I especially like because it’s a band dealing with a harder- and darker music style. I personally prefer the remix of Vanguard. It’s also interesting to see rather unknown bands remixing Stars Crusaders.

– – – : “Gemini” is the kind of EP that will mainly appeal to the die-hard fans of the band and also for some DJ’s. But if you want to discover Stars Crusaders you better listen to both albums instead of an EP.

Conclusion: “Gemini” is the kind of EP reminding us the great “Welcome To Hydra”-album although featuring an interesting selection of remixes.

Since you’re here … … we have a small favour to ask. More people are reading Side-Line Magazine than ever but advertising revenues across the media are falling fast. And unlike many news organisations, we haven’t put up a paywall – we want to keep our journalism as open as we can. So you can see why we need to ask for your help. Side-Line’s independent journalism takes a lot of time, money and hard work to produce. But we do it because we want to push the artists we like and who are equally fighting to survive. If everyone who reads our reporting, who likes it, helps fund it, our future would be much more secure. For as little as 5 US$, you can support Side-Line Magazine – and it only takes a minute. Thank you. The donations are safely powered by Paypal.
Tags: Stars Crusaders, Vanguard