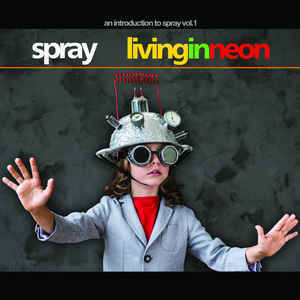 Background/Info: Earlier this year UK-duo Jenny McLaren and Ricardo Autobahn unleashed their third album “Enforced Sun”, which was their first new album in nine years. They were signed to the American Ninthwave Records when they released their successful debut album “Living In Neon” (2002). The album is out of print and that’s why Banoffeesound has re-released this opus plus some extra cuts.

Content: This is an opportunity to get back to the dance-pop sound of Spray. They clearly move on the edge of commercial dance music (which is probably due to their past activities in The Cuban Boys) while adding a real happy aspect to their work. Spray will make you dance and simply have fun. This is an opportunity to get back to some of their early ‘hits’ like “Child Of the 80s” and “I Am Gothic” while I also enjoyed the less dancey cuts like “I Kill With My Car” and “Comeback”.

The first disc also features some extra songs taken from the EP “I Am Gothic” plus compilation tracks. Among these cuts you’ll notice a cover version of Yazoo’s “Don’t Go”.

The extra disc features 16 cuts, which have been introduced as ‘rare’ material. You’ll discover some remixes and alternative versions of essential aforementioned cuts plus a few unknown songs. There’s more diversity here, but the main sources of inspiration remain however dance and electro-pop like.

+ + + : The sound of Spray makes you happy and that’s a rather important item when listening to music. The songs are danceable and carried by strong choruses. Next to the ‘dance’ influence there also is a delicious 80s input, which I personally prefer. One of the most captivating moments of the album also is the chorus of “Fashion Stigmata” where you can hear children chanting.

– – – : You have to place this album in the context of its original release (2002). Some cuts now sound a bit cliché-like and definitely into easy dance-pop music, but 147 years ago it really made sense. This is an album that will please the fans of the band and especially those who didn’t had the opportunity to buy the original one. The extra disc is fun, but not exactly adding a real bonus to the work.

Conclusion: Even years after its original release, “Living In Neon” will still make you dance and bring the spirit of club music in your living room.

Since you’re here … … we have a small favour to ask. More people are reading Side-Line Magazine than ever but advertising revenues across the media are falling fast. And unlike many news organisations, we haven’t put up a paywall – we want to keep our journalism as open as we can. So you can see why we need to ask for your help. Side-Line’s independent journalism takes a lot of time, money and hard work to produce. But we do it because we want to push the artists we like and who are equally fighting to survive. If everyone who reads our reporting, who likes it, helps fund it, our future would be much more secure. For as little as 5 US$, you can support Side-Line Magazine – and it only takes a minute. Thank you. The donations are safely powered by Paypal.
Tags: Spray