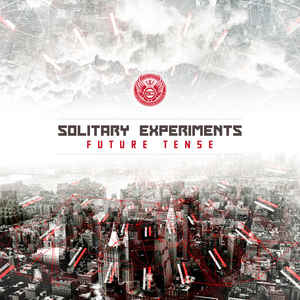 Background/Info: Solitary Experiments is a band I’m keeping an eye on since their very early years. The German formation became a recognized band dealing with electro/body-pop. “Future Tense” is their newest studio album, which was released 3 years after “Heavenly Symphony”.

Content: “Future Tense” is an interesting album title for featuring songs and a sound, which clearly bring us back to the past… This work isn’t retro-like, but seems to shout hard and loud that ‘future-pop’ is alive more than ever before. The album reveals a succession of great and carrying future-pop pieces, which will clearly appeal for the fans of VNV Nation and co. Sometimes a bit more dreamy-like, but mainly danceable, “Future Tense” is a noticeable album in its genre.

+ + + : You immediately will notice the maturity of this band. They’ve accomplished a major album, which –even if doesn’t bring anything new, maybe is one of their best productions in history. It’s a melodic and danceable piece of work, but still a work filled with sensibility and emotions. There are several songs illustrating the talent of the band. I for sure can refer to the already know “Crash & Burn” (featuring female vocals by Tea F? Thimé from Ashbury Heights), but also “Brace Yourself!”, “Shelter”, “I Am”, the harder sounding “Double Dealer” and my personal favorite one “Every Time”.

Among the remixes I especially recommend the harder and darker sounding remix of “Double Dealer” by Empirion, but I also noticed cool contributions from Mental Discipline, Rob Dust, People Theatre, Paul Parra and a surprising acoustic remix by Mono Inc.

– – – : I don’t see real minor points although Solitary Experiments became a little bit predictable in their composition while a few songs are moving on the ‘commercial’ edge of dance music.

Conclusion: Solitary Experiments have already released great and noticeable productions, but I consider “Future Tense” as one of their best in history. Future-pop is alive and this album clearly symbolizes this fact.