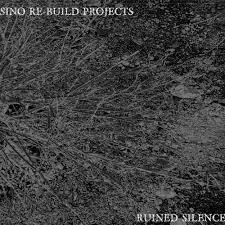 Background/Info: Sino Re-Build Projects is the solo-project of Japanese artist Sino. He’s already been active since the early millennium years releasing his work on his own label Re-Build Records.

Content: “Ruined Silence” covers a wide range of influences. The work takes off a rather ambient style, but moves on towards a kind of industrial-punk to pure experimentalism to hard-core passages. This artist creates a melting pot between many sources of inspiration on which the guitar appears to be the main instrument.

The work remains instrumental and that’s for sure a controversial point. I got the impression that vocals could add a real bonus and even an achievement. It now remains pretty demo-like although a few, more ambient driven compositions are pretty efficient without vocals.

The work has been completed with numerous electronic treatments and multiple noise sources. It’s not only about guitar, but it for sure remains the basis of “Ruined Silence”.

+ + + : I enjoy the ambient and somewhat industrial aspect of the album, which reveals a real tormented and apocalyptic vision. “Junk Me… [Reproduct] is a great piece of music.

– – – : I don’t have anything against instrumental releases, but most of the songs are suffering from a total absence of vocals and/or samplings. It now sounds like a vulgar demo format.

Conclusion: Sino Re-Build Projects definitely tries to take the listener by surprise composing an experimental-driven work carried by guitar. The idea is interesting, but the final result left me rather skeptical.