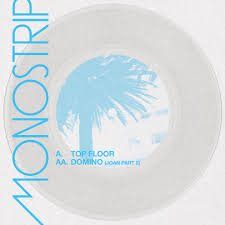 Background/Info: Monostrip is an electro combo hailing from Stockholm (Sweden), which recently released their 2nd album “Framed”. This single features 2 songs that originally appeared on the album.

Notice by the way that Monostrip is a kind of side-project from the more famous I’m From Barcelona.

Content: Speaking for myself I personally prefer the debut album “The Grand Youth” (2010) instead of the new full length “Framed”. It doesn’t take away that this single features good-old retro electro-pop elements like a typical deep, resonating poppy bass line and multiple cool 80s like effects.

There’s a nice twist between vintage electro ingredients and numerous effects, which sometimes are a bit into nu-disco style on “Top Floor” and a bit more funky-like on “Domino (Joan Part II)”.

The vocals are pretty special for the sweet timbre of voice, which is a bit inhibited.

+ + + : Monostrip definitely is not the kind of synth-pop copyists trying to emulate the sound of a leading formation in the genre. I’m not saying that they’re fully inventive, but I like the way they’re mixing 80s inspired electro-pop and pure nu-disco sound effects.

– – – : Both songs are missing some catchy elements and a real carrying melody line.

Conclusion: Monostrip is an interesting band for being ‘different’ from the average electro-pop standards, but there’s much more potential inside this band than what they’ve shown on their newest album. The vinyl format is an interesting collector item for the heaviest fans of the band.