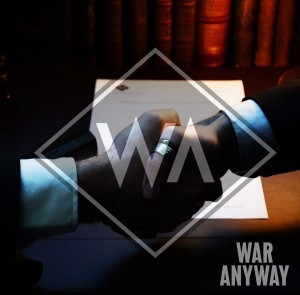 Background/Info: War Anyway is a band from France, which unleashed this EP a few months ago now. The EP features 5 songs.

The work sounds pretty dark and even a bit tormented. Some of the shouting vocal parts create an evil touch, but still accentuate the doom aspect of the work. There also is an instrumental piece featuring a long speech of President Obama instead of real vocals. This is a short and cool cut, which would be the right intro song for a live performance.

+ + + : “War For Peace” is not exactly into fast and furious compositions, but into efficient and overwhelming doom atmospheres empowered by guitar and refined by electronics.

– – – : The songs are easy listenable pieces, but without a true apotheosis. There’s no real potential killer, but just an interesting basis to walk on with.

Conclusion: War Anyway seems to share a kind of conceptual passion for war themes, but to get their sound really punching, they now have to transpose some elements of war like ‘aggression’ and ‘power’ into their music. I however like the global concept and ideas running through their work.