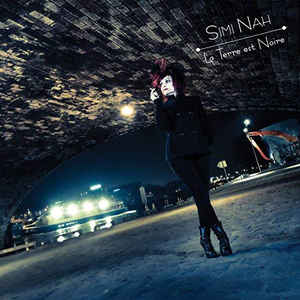 Background/Info: French born Simi Nah who lived for years in Belgium has announced that “La Terre Est Noire” will be her last album. Together with her partner in crime ‘kgb’ she released 3 full length albums plus this new opus featuring 11 new tracks.

Content: Simi Nah has been always characterized by a vintage electro-pop/wave-pop style. Some of the lyrical themes were pretty serious, other rather funny, but the music has been always ‘light’, ‘fun’, and a great piece of retro-electro. “La Terre Et Noire” which can be translated as “The Earth Is Black” is not that different in the global approach, but definitely the darkest and doomy opus. It all feels a bit like Simi Nah has no more fun to live and that’s not a coincidence as the lyrical themes are reflecting despair, melancholia, thoughts of suicide… but it also might be a metaphor to say goodbye to her audience. The last cut “Je Vous Tire Ma Révérence” is quite explicit.

Sound-wise the songs mix great, vintage synths and heavier guitar playing. The songs have been sung in French, with this typical and sweet timbre of voice the artist has used to handle.

+ + + : The 80s touch, which mainly comes through in the retro-synth parts is great. But Simi Nah’s music has been always characterized by the little electro-bleeps and empowering guitar parts. This work doesn’t sound that different. The guitar playing also accentuates the ‘darkness’ hanging over this work. I prefer the opening songs, which are more in the ‘familiar’ style of the artist while the second part is definitely dark and depressed. The title song reminds me even of Mylène Farmer for its lyrical format and the suicidal-pop approach.

– – – : Simi Nah clearly lost fun in life and that’s an item you rapidly will notice at her album. The songs are missing the usual energy and poppy happiness, but at the other side it clearly appears to be her most intimate work ever. From a pure commercial point of view, I’m not sure it as the best strategy to announce the end of the band together with the release of the album. But Simi Nah seems to be an honest person and that’s for sure something we have to respect.

Conclusion: “La Terre Est Noire” appears to be the bow for Simi Nah, an artist I fully enjoyed during her career. She gave me some fun and I always felt happy after having listened to her music. She now decided to stop in a rather dark and melancholic style.

Since you’re here … … we have a small favour to ask. More people are reading Side-Line Magazine than ever but advertising revenues across the media are falling fast. And unlike many news organisations, we haven’t put up a paywall – we want to keep our journalism as open as we can. So you can see why we need to ask for your help. Side-Line’s independent journalism takes a lot of time, money and hard work to produce. But we do it because we want to push the artists we like and who are equally fighting to survive. If everyone who reads our reporting, who likes it, helps fund it, our future would be much more secure. For as little as 5 US$, you can support Side-Line Magazine – and it only takes a minute. Thank you. The donations are safely powered by Paypal.
Tags: Simi Nah