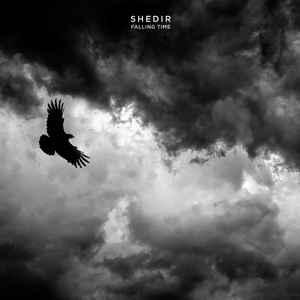 Background/Info: This is the debut album of Shedir. Behind this name is hiding a solo-project set up by the female Italian artist Martina Betti.

Content: “Falling Time” is characterized by a sound that moves in between dark-ambient and the soundscape genre. The tracks create a sensation of evasion, which is comparable to the picture on the front cover revealing a bird wafting in a grey sky. That’s precisely symbolizing the work of Shedir, which is also accomplished by more industrial- and drone-like passages.

+ + + : “Falling Time” is an album I’ve listen to several times. It has something atypical and that’s probably of the dreamy side, but behind this relaxing sensation is hiding a dark and anguished sound. It’s a sensible composition. I don’t really know if it’s because it has been composed by a woman –which is rather unique for this kind of music, but it’s different from the ‘usual’ releases in the genre. That’s already a sensation I had when discovering Protou (another dark-ambient project driven by a female artist). The tracks are well-crafted and I especially want to recommend “Reverse Thrust” and “Skyness” as most noticeable and accomplished cuts.

– – – : The unique style is the reason why I need several listening before I really get into this album. Some of the tracks are a bit similar and that’s maybe an element that can be improved on further work.

Conclusion: I’m intrigued by Shedir, which offers the listeners a dark and meditative opus. It’s relaxing, but you always can feel an invisible presence like a nearby danger that can hit you by surprise.

Since you’re here … … we have a small favour to ask. More people are reading Side-Line Magazine than ever but advertising revenues across the media are falling fast. And unlike many news organisations, we haven’t put up a paywall – we want to keep our journalism as open as we can. So you can see why we need to ask for your help. Side-Line’s independent journalism takes a lot of time, money and hard work to produce. But we do it because we want to push the artists we like and who are equally fighting to survive. If everyone who reads our reporting, who likes it, helps fund it, our future would be much more secure. For as little as 5 US$, you can support Side-Line Magazine – and it only takes a minute. Thank you. The donations are safely powered by Paypal.
Tags: protoU, Shedir