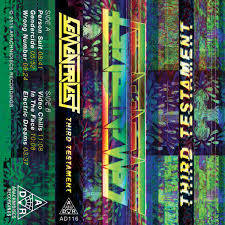 Background/Info: Semen Priest is a Canadian formation unleashing their 3rd full length by Arachnidiscs Recordings, which is mainly devoted to the good-old and now totally underground cassette format.

Notice by the way the album is also available in a digital format on Bandcamp.

Content: I never heard of this band before, but the sound Semen Priest is dealing with clearly evokes some good-old souvenirs bringing me back to some 80s formations. There’s a kind of funky-industrial approach, which sounds a bit like the offspring between Revolting Cocks and Schriekback while some passages also remind me of the Luna Twist (old Belgian band). The sound is hard to define and yet familiar if you have been into the wider fields of new-wave music.

There’s a nice twist between electronics and guitar while the vocals reveal a kind of zombie, growling style. The songs are quite extended, but remain fascinating for their global sound texture. There also is a move from psychedelic passages into deep, resonating bass parts to this dark and industrial funky touch. Especially the first part of the album is quite remarkable.

+ + + : Semen Priest is inspired by some forgotten parts of the 80s electro & new-wave scene and will definitely appeal for lovers of early Revolting Cocks, My Life With The Thrill Kill Kult, Mussolini Headkick and other Schriekback.

– – – : “Third Testament” not always is the most accessible release while the cassette format is probably not the best way to bring a band in the spotlights.

Conclusion: “Third Testament” is a cool discovery bringing me back to forgotten times and legendary bands.