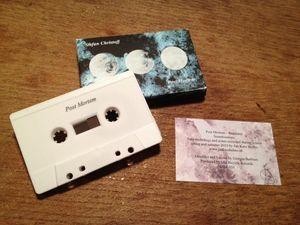 Background/Info: Old Bicycle Records is a small Swiss label, which is mainly releasing cassettes and releasing CD’s from time to time. This cassette features Stefan Christoff (Canada) and Post Mortem (The Netherlands).

This album sounds a bit surreal as both artists don’t really have that in common when it comes to their sound.

Content: The first side features 6 tracks by Stefan Christoff, which brings the listener into a world of imagery and cinematographic sounds. The work is pretty minimal and definitely experimental. I like some dreamy passages and the somewhat eastern inspired atmosphere running through “Correspondance”.

Both last cuts are accentuating the cinematographic approach and the dreamy element as well. The piano playing creates this unique atmosphere leading the listener to imagine own images.

Post Mortem is totally different and even a kind of sonic antidote to Stefan Christoff. This artist who’s already active for numerous years is opening a fictive gate to join a world of sonic mayhem and multiple noises. We’re moving through a sound made by field recordings, samplings and multiple manipulations. A few parts of lost voices are featured in this bizarre atmosphere with an extra haunting touch.

+ + + : Stefan Christoff clearly reveals to be a talented composer in the soundtrack genre while Post Mortem reveals a rather accessible format of noise and experimentalism.

– – – : Both sides of this cassette (and artists) are not exactly compatible with each other.

Conclusion: “Tape Crash #12” reveals to be a sonic ‘clash’ when it comes to analyze respective work and influences of both artists.

Since you’re here … … we have a small favour to ask. More people are reading Side-Line Magazine than ever but advertising revenues across the media are falling fast. And unlike many news organisations, we haven’t put up a paywall – we want to keep our journalism as open as we can. So you can see why we need to ask for your help. Side-Line’s independent journalism takes a lot of time, money and hard work to produce. But we do it because we want to push the artists we like and who are equally fighting to survive. If everyone who reads our reporting, who likes it, helps fund it, our future would be much more secure. For as little as 5 US$, you can support Side-Line Magazine – and it only takes a minute. Thank you. The donations are safely powered by Paypal.
Tags: Post Mortem, Stefan Christoff