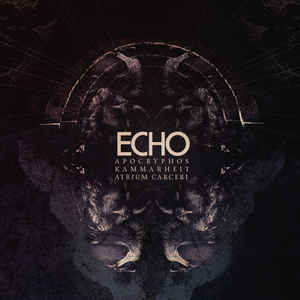 Content: You somewhere can hear that those artists are quite familiar working with each other. The work doesn’t sound at all as a side-project, but more like a real accomplished piece of music. The atmospheres hanging over the tracks are filled with sorrow, which is an element accentuated by the piano keys. Field recordings and multiple sound treatments have been added resulting in a dense cinematographic impression.

The obscure atmospheres have a strong visual impact on the listener while there also is a noticeable evolution in the tracklist reaching its peak on, “In An Arched World” and “Omission”. The dark-ambient sound was transposed in a tormenting vision characterizing the global strength of this ambient work.

+ + + : “Echo” sounds like it is moving on where “Onyx” left off. There’s a judicious merge between all influences, but the main noticeable element is the impressive atmospheric touch, which also is the essence of any good dark-ambient opus. “Echo” reminds me a bit of a dark and tormented adaptation of Philip Glass. It has something emotional and has been elaborated with intelligence and all the talent of those 3 dark Masters. “Echo” is one more successful work between label mates active at Cryo Chamber.

– – – : Some cuts are a bit too similar and that’s maybe the only minus point about this album. “Onyx” was a bit more diversified, but maybe less accomplished.

Conclusion: I remember to have said that I sincerely hoped those protagonists would work again after the successful “Onyx” experiment and that’s what they did. But they still did it with the same passion achieving a new noticeable opus.

Since you’re here … … we have a small favour to ask. More people are reading Side-Line Magazine than ever but advertising revenues across the media are falling fast. And unlike many news organisations, we haven’t put up a paywall – we want to keep our journalism as open as we can. So you can see why we need to ask for your help. Side-Line’s independent journalism takes a lot of time, money and hard work to produce. But we do it because we want to push the artists we like and who are equally fighting to survive. If everyone who reads our reporting, who likes it, helps fund it, our future would be much more secure. For as little as 5 US$, you can support Side-Line Magazine – and it only takes a minute. Thank you. The donations are safely powered by Paypal.
Tags: Apócrýphos, Atrium Carceri, Kammarheit