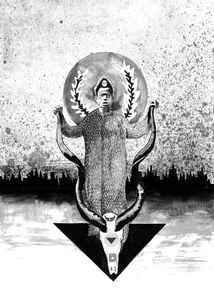 Background/Info: Oggy Records is a small underground label devoted to experimental electronic formats. This split-tape features Bert van Beek aka Scheerling who already released previous work on Oggy Records and Thaumaturgist (which you maybe discovered on earlier work released on Barreuh Records). Scheerling takes off with 4 tracks while the B-side reveals 2 cuts from Thaumaturgist. The release is digitally available as well.

Content: Scheerling definitely is the most experimental project from the release. There’s a slow and meticulous progression revealing multiple sound manipulations and effects. The sound is raw and dark although resulting in serene passages. It sounds like a sonic puzzle, which now and then reaches a climax.

Thaumaturgist is more into early electronic experiments reminding me of the vintage electro-industrial approach of SPK. This band clearly reminds me of good-old 80s experiments in electronic- and industrial music. There also is a noticeable progression in the song structure, which has been accomplished by an impressive arsenal of studio tricks and effects.

+ + + : This split tape reveals pure underground projects, but still fascinating experiments in sounds. I have a preference for the more accessible Thaumaturgist, but both projects are worthy of examination. This is an original release with a great sonic approach and revealing the renewed interest for cassette releases.

– – – : I have never been a huge addict of split-releases and I would have preferred to get separate work from both artists. The main difficulty for both bands will be for sure to get some attention as I really believe they deserve it.

Conclusion: Vintage music released on a lost (cassette) format; it will please the biggest underground freaks, but it also is an interesting discovery for experimental heads.