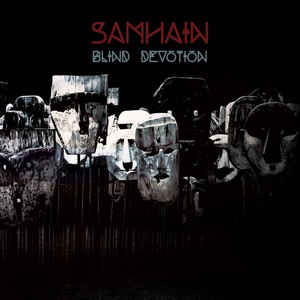 Background/Info: Slovakian Samhain trio struck back last year with a noticeable work entitled “One Minute To Twelve”. The album revealed a fascinating exploration of IDM, experimental- and industrial music. “Blind Devotion” is their newest opus, which is inspired by ‘the souls of innocent victims and their executors’.

Content: The sound of this album has evolved in a noticeable way. It’s less IDM-driven and more into a sophisticated industrial format mixed with dark-electronic atmospheres reminding to late Yelworc. It’s still very Klinik-al. Heavy sound blasts and overwhelming atmospheres are the main essence of “Blind Devotion”.

+ + + : It’s not that easy to define this work, but it clearly tastes like an intelligent industrial sound format. The tracks are sophisticated mixing pomposity and refinement. There are a few spooky vocals, which are totally matching with the sound approach. It all together creates a tormented atmosphere, which excels at a few cuts like “Commandments For The Restoration”, “Spahn Ranch” and “Aum Supreme Truth”.

– – – : I’m somewhat missing the more explicit IDM-side from the previous work, but I’ve to say this album remains characterized by impressive sound treatments.

Conclusion: Samhain has released two fascinating albums in two years time. The explicit care for great sound treatments and anguishing sound atmospheres both make this band worthy of examination. This is a project, which clearly deserves a wider recognition.