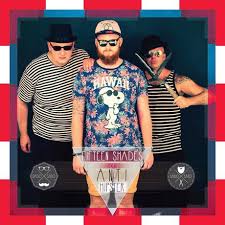 Background/Info: SadoSato is an EBM combo based in Graz (Austria), which has already released a few number of productions. They strike back with this funny-titled EP featuring the title song “Fifiteen Shades Of Anti-Hipster” plus 14 remixes by other artists.

Content: The title song reflects a pure and somewhat old-styled EBM in the purest tradition of the genre. The song has been clearly inspired by a band like DAF and is a well-crafted raw piece of retro body music. One of the main characteristics is the somewhat atypical and punkish way of singing.

We next get a kind of remix ‘gang bang’ revealing 14 bands. The title song has been exposed to the body skills of a few famous formations like Plastic Noise Experience and Ad:Key while most of remixes have been accomplished by less familiar names. We already have heard of bands like Invasion Of Female Logic, Frontal and the excellent Akalotz or even the Russian Synthetisch Lebensform, but bands like Elektro Ferret, Muscles On The Move, Werksfront ao are not exactly established names.

I heard several noticeable remixes, but I’ll tip the fast and powerful-like remix by Pagan Struck, which is another interesting band to discover.

↑↑↑: SadoSato is a real interesting and somewhat weird EBM act, which is progressively getting more name and fame. There’s an interesting number of unknown EBM remixers.

Conclusion: If you’re into good-old EBM the “Fifteen Shades Of Anti-Hipster” will give you pleasure and joy!