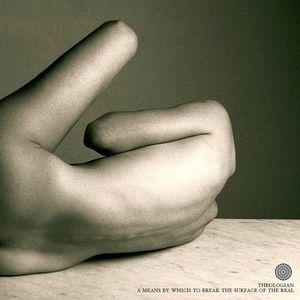 Background/Info: Lee Bartow (Leech) remains a prolific artist. This vinyl was originally released as a CDR in 2014 by Annihilvs (the own label of Theologian) and got re-released a few months ago by Nothing Under The Sun (subdivision of Redscroll Records).

Content: I was a bit disappointed by the last full length of Theologian (cf. “Pain Of The Saints”), which sounded a bit chaotic and less coherent in the different influences. I definitely prefer this 12”, which is more driven by a strong basis of industrial and ambient influences.

The listener rapidly feels like embarking on a heavy trip through industrial turmoil and obscure ambient sound waves. This is a misty universe where vocals have been tortured into loud screams of terror. Hard drones inject an oppressive feeling, which instantly takes you by the throat. Leech conceived meticulous, chilling loops getting the listener into a freaky sonic tunnel. There’s no real exit from this imaginary place called ‘horror’. You feel like you are imprisoned by a tension, which becomes higher when icy, scratching sounds and other sharp, metallic noises are joining in.

↓↓↓ : My single regret is that it is a vinyl release. This is the kind of stuff composed by Theologian that I would have liked to have heard an entire full length album of.

Conclusion: Theologian switches from average releases to real genius productions. “A Means By Which To Break The Surface Of The Real” definitely belongs to the supreme category of dark music.