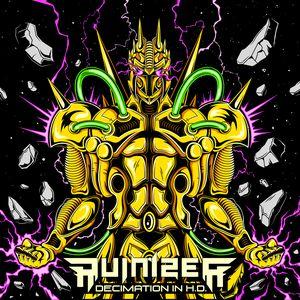 Content: This is the 2nd album by Ruinizer, which was already released a few months ago on CD format featuring 13 songs plus 4 remixes. We now welcome the digital version, which only features the original songs without any remixes.

Ruinizer claims to compose ‘swaggrotech’, which is a genre they invented, but which definitely belongs to the wider fields of dark-electronic music. The main difference with established standards and average bands is the complexity of their work. Ruinizer sounds like a controlled chaos carried by bombastic elements. They sometimes remind me of Ministry on electronics merged with Mentallo & The Fixer! There’s an impressive and merciless power emerging of the writing, which will absolutely move you.

Ruinizer is definitely miles away from the familiar electronic standards, and I have to say that I noticed an impressive evolution in sound and global production on this new work. Next to the heavy rhythm and aggressive sequences plus harsh screaming vocals you also will perceive a well-crafted atmospheric layer hanging over different songs. It adds a mysterious and dark element to the production.

The title song featuring Avarice In Audio is absolutely sensational for its mysterious atmospheric input reinforced by some ghost-like female chants. There also is a great progression running through this cut. In a different approach I also have to tip “Subhuman”, which is based upon more ‘classic’ dark-electro elements reminding me of Suicide Commando, but mixed with a kind of furious Ministry injection. This track sounds like pure hell-music!

Next to the contribution of Avarice In Audio a few more ‘mates’ were invited to accomplish some songs. This formula was already used on the album “Mechanical Exhumation Of The Antichrist”. “Devilution” featuring Surgyn is a successful collaboration revealing heavy loaded sound layers and the typical bombastic element. Seraphim System (which already contributed to a song of their debut album) has been featured at “Go To Hell”, which is an icy sounding composition evolving towards a kind of hardcore electronic.

There’s a lot to experience in this work, but all songs remain driven by a similar energy and complex writing. Ruinizer is not always the most accessible band although one of the few trying to deal with a progressive sound. “Fukdat” and “The Face Of Chaos” both are excellent songs getting us more used to the sound approach of this particular band.

Conclusion: In comparison with their debut album “Decimation In H.D.” became more elaborate and still more complex in sound. Ruinizer clearly tries to experiment with new influences, which in the end remain pretty dark-electro orientated.