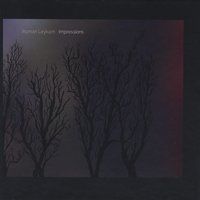 Background/Info: Roman Leykam is a veteran of the experimental music scene and a familiar artist from the Frank Mark Arts roster. He has released numerous solo-albums and productions together with Frank Mark. “Impressions” is a new work featuring 15 cuts.

Content: I think it’s important to have a look at the booklet inside this digipak. There are different pictures of nature elements. It concerns details and beautiful colors. It creates a delicious harmony with the sound of Roman Leykam, which is a new experimental exposure of wafting sound treatments.

The guitar remains the main instrument, which is also used to produce multiple effects. The result is a rather relaxing and somewhat cinematographic. You feel like you are entering into a dream accentuated by the sound of flutes and psychedelic guitar parts.

+ + + : There’s an interesting harmony between the visual character and the music of Roman Leykam. It directly gives a higher dimension to the sound, which is accentuating the link with cinematographic music. I like the wafting sensation from this work while I also have to mention the great artwork and the especially the booklet. It simply confirms that a physical release will always have this little bonus, which you’ll never find on streaming and/or digital formats.

– – – : You have to be familiar with the work of Roman Leykam and the sound of Frank Mark Arts, which remains minimal and will appeal to a restricted number of people.

Conclusion: Music can be the right format for meditation and if you’re in search of a new and different experience in the genre, I can only, but recommend Roman Leykam.