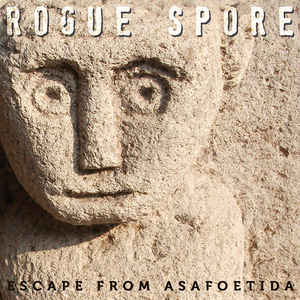 Background/Info: Rogue Spore is an Irish music project active since 2010 and has already released a considerable number of (digital) productions. “Escape From Asafoetida” appears to be the first album released on CD format.

Content: I honestly can’t remember to have heard of this band before. I discovered a rather versatile production, which is carried by electronics, but covering different influences. There’s an omnipresent ambient/space aspect running through the tracks and which is regularly empowered by sweeps. Some cuts are reminding to 80s influences, but globally speaking it remains an experimental listening.

+ + + : I especially like the vintage sound elements running through this work. There’s a cool switch from ambient towards experimental music while both styles have been assimilated as well. I like the sound intelligence running through the title track while I also have to mention the minimalism “Spirit Vinegar” has been made of.

– – – : Some of the opening cuts are a little bit hesitant and not that relevant. I’m referring to elements like pitched vocal samplings a few tracks driven by hardcore cadences. The versatility of the work is another element, which is not always that convincing. Some of the tracks are too different from each other.

Conclusion: If you like an electro-space odyssey, I can recommend listening to Rogue Spore. The least I can say is that this project sounds like no other!