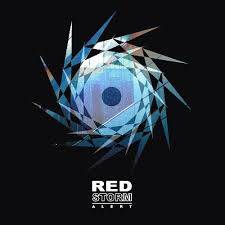 Background/Info: Behind Red Storm is hiding Desdemona singer Agnieszka Leśna. An American journalist who saw Desdemona on stage defined her stage performance as a ‘red storm’. and the name of Agnieszka’s new project was found.

Notice by the way that the album has been co-produced by John Fryer (This Mortal Coil) and Chillean producer Ivan Muñoz (from his work with Atari Teenage Riot, die Krupps, Tyske Ludder ao);

Content: The debut songs reveal a solid sound consisting of harsh electronics treatments and empowering guitar riffs while the rhythm is absolutely dynamic. Red Storm moves in between broken- and break beats. The vocals are pretty furious, which totally fits with the ‘storm’ of the band name (red referring to the color of her hair).

“Alert” takes off a hard and powerful way while most of the choruses are carrying and becoming a bit transcendental. Quite progressively the songs become somewhat softer and supported by pop-rock influences. Most of the choruses remain noticeable.

+ + + : The beginning part reflects dynamism, power, carrying choruses and charismatic plus passionate vocals. This is for sure the best part of the work.

– – – : The softer pop-rock driven songs are not the most convincing ones.

Conclusion: Red Storm feels comfortable when the sound is driven by rage getting the Polish front-diva totally wild, unpredictable and irresistible. This is a successful debut work.