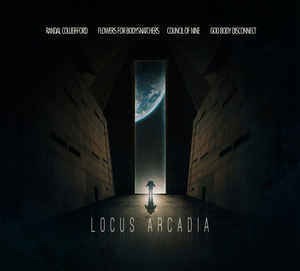 Background/Info: We’re used to discovering Cryo Chamber releases featuring multiple bands from the roster working together on a conceptual theme. This album is more a kind of split-album featuring 4 bands each delivering one track and inviting listeners to embark for a voyage towards the ‘Locus Arcadia Space Station’.

Content: The common element between the 4 protagonists clearly is the sound they’re dealing with. This is a dark-ambient voyage revealing elaborated sound constructions accomplished with multiple noise treatments and other field recordings.

From the oppressive sound waves and sharp noise waves by Randal Collier-Ford to the extremely elaborated and diversified sounding contribution of Flowers For Bodysnatchers to the slowly progression track of Council Of Nine to the final cut of God Body Disconnect revealing an impressive arsenal of noises and sonic treatments, this work is moving from real freaky passages to evasive parts.

+ + + : The main strength of this work is the amazing arsenal of sounds and noises that were used by all of the bands. They really show us an impressive sound canvas mixing field recordings with sound treatments. All songs have been meticulously composed and elaborated. It clearly sounds like a work that has been made with truly passion. The opening piece by Randal Collier-Ford is a pure masterpiece.

– – – : I always have some reservations with split releases, but that’s for sure a very personal point of view. I prefer a full length opus from one band and Cryo Chamber clearly has different outstanding formations.

Conclusion: “Locus Arcadia” clearly appears the place to be when it comes to enjoy great dark-ambient atmospheres while Cryo Chamber confirms its growing status of major label dealing with dark-ambient music.

Best songs: Randal Collier-Ford “Into The Maw Where All Men Die”, “Council Of Nine “Pale Sister Of Sanctuary Lost”.