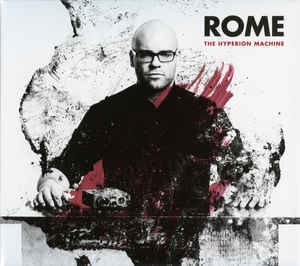 Background/Info: Jérôme Reuter has gained a serious reputation since his debut work released in 2006 on the now lost Cold Meat Industry. Rome rapidly became a recognized artist dealing with neo-folk and martial orientated music. The Luxembourger progressively evolved towards a more open-minded sound, which brought him to experiment with other influences like ballads and acoustic rock music. Rome is prolific artist and still one of Trisol’s flag holders. We now welcome his newest opus featuring 11 new songs.

Content: Rome remains faithful to the open-minded sound he deal with on albums like “A Passage To Rhodesia” and the earlier this year released “Coriolan”. The songs are driven by elements of acoustic rock-folk music carried by great guitar playing. Other influences like dark and sad ballad passages are joining in while there still is this typical ‘chanson’ aspect inspired by some Belgian and French masters like Jacques Brel and Léo Ferré. If you know those artists you for sure know they passion and talent for poetry. That’s an important element in the work of Jérôme Reuter. His lyrics are rather dark and desperate. It’s definitely not the kind of music you can listen to when you feel sad, but throughout the lines I also perceive a message of hope.

“The Hyperion Machine” also reveals a few extra refined parts and I’m especially referring to the cello adding an extra sad, but beautiful touch to the work. Reuter’s deep timbre of voice, but still several songs still remind me of artists like Nick Cave and even Leonard Cohen. A few guest artists contributed to this work adding something extra to the songs. Talking about guest artist I hope maybe one day Rome will join hands with an artist like Matt Howden (Sieben). I’m sure it could be a genius match.

+ + + : I sincerely get the impression that Rome went on there where an album like “A Passage To Rhodesia” stopped. The new work sounds even more intimate and therefore sensitive. It’s a beautiful composition mixing different styles with each other. There’s no compromise, but just a passion for music that comes to touch you. All influences together create a real harmony revealing beautiful although sad passages. It sounds evasive and full of melancholia. It reflects maturity and intelligence and resulted in several outstanding songs.

– – – : Only the 2-3 last songs of the album can’t totally convince me. I here got the impression that Rome has suddenly lost his creative mind and artistic elegance.

Conclusion: Sadness never has been that beautiful! This is a beautiful work featuring poignant songs.