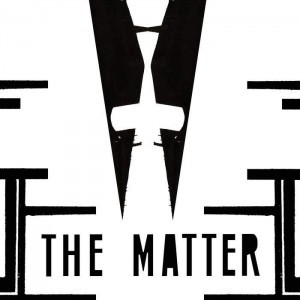 Background/Info: ‘Radio Free Clear Light is a living radio built of human components, a single entity presently formed by four individuals’ is the way this band introduced themselves to the planet music. Hailing from San Francisco (USA), RFCL has already released a numbers of productions.

This work has been conceived as a ‘noise glitch accompaniment to the graphic poem of the same name. “The Matter” is a sonic interpretation of themes of Gnosis and questions of consciousness and autonomy.”

Content: “The Matter” is a solid piece of music reassembling solid industrial elements, dark-ambient atmospheres and pure experimental treatments. A few other elements can be noticed as well and I especially refer to a great, vibrating dub touch right at the beginning of the album. Fragmented vocals (mainly samplings) also have been added to the composition.

The experimental aspect comes through on numerous parts. It all sounds like RFCL is using an entire arsenal of field recordings and/or samplings. It creates an overwhelming sonic canvas revealing a truly minimal approach while holding on to the industrial basis of the work.

+ + + : I enjoyed the diversity of the influences and the professionalism of the global production. The dubby touch right in the beginning sounds absolutely fantastic.

– – – : Despite of the impressive number of sounds, some tracks are too similar with each other and I refer to the two last cuts.

Conclusion: I never heard of this band before this album and the least I can say is that RFCL deals with a successful and eclectic piece of industrial/experimental music.

Best songs: “Something Lies Hidden”, “What Is Inside”.