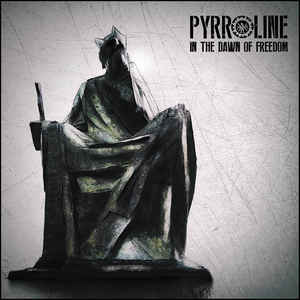 Background/Info: Pyrroline has released their second official album. Four years after “Ruins Outlast”, Arnte & Schmoun are back on track with a kind of conceptual album dealing about the war in Croatia during the 90s.

Content: “In The Dawn Of Freedom” is a kind of sophisticated EBM sound. The main focus clearly is not to composer hard and powerful songs, but a more elaborated and complex writing, which might remind you of Mentallo & The Fixer and even Skinny Puppy. The songs have been constructed with multiple bleeps and crystalline sequences mixed with harsher and somewhat bombastic rhythms. The vocals are quite spooky, which fits with the atmospheric side of the work.

Some (instrumental) cuts are even moving on the edge of cinematographic music and I here would make a comparison with Benestrophe. But Pyrroline is a band with many ‘faces’ and also deals with a few more ‘traditional’ EBM cuts.

Both last cuts are remixes by One Eye Wanders and kFactor.

+ + + : The diversity of the songs definitely is one of the main characteristics of the album, but it also reveals that Pyrroline is open to different influences. I personally prefer the main part of the album revealing sophisticated and elaborated cuts. The ambient side hanging over the songs is more important than power. You should (re)listen to these songs with headphones to fully distinguish the little bleeps and icy sequences. I also discovered another side of Pyrroline, which sounds somewhat harder and into ‘classical’ EBM fields. “Succeed” is a great piece in the genre, reminding me of Plastic Noise Experience.

– – – : Despite of the diversity and the well-crafted songs, Pyrroline doesn’t really add anything new in the wider fields of EBM. I rapidly got a ‘déjà-vu’ effect although you don’t hear me complaining. Both remixes aren’t exactly adding a bonus to the album!

Since you’re here … … we have a small favour to ask. More people are reading Side-Line Magazine than ever but advertising revenues across the media are falling fast. And unlike many news organisations, we haven’t put up a paywall – we want to keep our journalism as open as we can. So you can see why we need to ask for your help. Side-Line’s independent journalism takes a lot of time, money and hard work to produce. But we do it because we want to push the artists we like and who are equally fighting to survive. If everyone who reads our reporting, who likes it, helps fund it, our future would be much more secure. For as little as 5 US$, you can support Side-Line Magazine – and it only takes a minute. Thank you. The donations are safely powered by Paypal.
Tags: EBM, Pyrroline