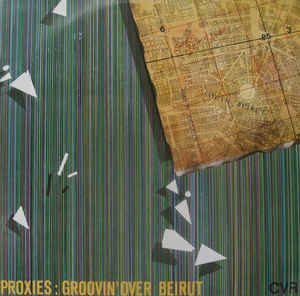 Background/Info: Anna Logue Records takes us back in time to Greece. Proxies was originally set up in 1980 and had released a few productions during the 80s and early 90s. “Groovin’Over Beirut” was their debut album released in 1983 on the Greek record label CVR. This re-issue features the original songs of the album plus a few previously unreleased tracks and 3 so-called ‘pre-release’ tracks.

Content: This album is an opportunity to (re)discover a band, which was totally devoted to the electro-pop-wave style of the 80s. The opening song sounds a bit like a hybrid between Kraftwerk, OMD and Erasure (for the vocals). It clearly indicates what Proxies were all about.

The songs are supported by this typical 80s spirit and the cold, vintage electronic sound treatments. Some cuts remind me of early Depeche Mode. The most surprising song is the cover version of the famous “These Boots Are Make For Walkin’”.

The bonus song are not very different, but for sure a nice extra for the fans of the band.

+ + + : Proxies will rapidly awake the good-old spirit of 80s electronics. It also brings a band back to life, which hasn’t maybe found a deserved and more international recognition. This band perfectly reflects the true-old synth-pop style mixing great electronic treatments and cool, carrying choruses. The title song and “It’s A Life-Life” both are efficient examples of this band’s potential. Another attention grabber is the opening –and instrumental, “Photocollage”.

– – – : I think a few songs are missing an extra melodic touch.  The bonus part of this album doesn’t really add to the production. It’s just cool, nothing less, nothing more.

Conclusion: Anna Logue Records had a good idea to bring back this early 80s work back to life. It for sure concerns band young electro-fans that never heard of them before, but I’m sure it will be also a discovery for older fans as well.

Since you’re here … … we have a small favour to ask. More people are reading Side-Line Magazine than ever but advertising revenues across the media are falling fast. And unlike many news organisations, we haven’t put up a paywall – we want to keep our journalism as open as we can. So you can see why we need to ask for your help. Side-Line’s independent journalism takes a lot of time, money and hard work to produce. But we do it because we want to push the artists we like and who are equally fighting to survive. If everyone who reads our reporting, who likes it, helps fund it, our future would be much more secure. For as little as 5 US$, you can support Side-Line Magazine – and it only takes a minute. Thank you. The donations are safely powered by Paypal.
Tags: Erasure, Kraftwerk, OMD, Proxies