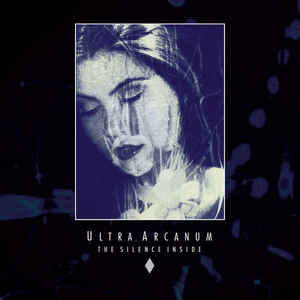 Background/Info: Ultra Arcanum is a London based formation consisting of Mark Thirkell (vocals) and Konstandinos Dorlis (electronics). Their debut work “The Silence Inside” was released on the ‘young’ label Nadanna. This label was set up by the owners of Electro Aggression Records and Anna Logue Records and is devoted to  minimal synth music, italo disco and electro-pop.

Content: It’s not that easy to grasp the sound of this formation, but I definitely notice an atypical and minimal approach in electronics. It’s not exactly what I would call ‘traditional’ electro-pop music rather than a mix of pop elements together with atmospheric influences and some vintage sounds. Some songs are still featuring guitar parts played by guest musicians.

The CD format (there also is a vinyl) features 4 extra songs, which are remixes accomplished by 23rd Underpass, The Silicon Scientist, Techniques Berlin and Epic Dreams.

+ + + : The least I can say is that Ultra Arcanum composes a very own style, which is inspired by old-school electro influences and minimalism. It even becomes a bit experimental-like, making the originality of the record. Among the remixes I noticed an interesting and more danceable-like approach by the Canadian formation Techniques Berlin. Another interesting aspect is the digipak format adding an artistic touch to the work.

– – – : The songs are suffering from a lack of professional production, which might explain the rather flat sounds and the under-produced vocals (at least on a few songs). Even if this band definitely strives for an original sound approach, the sounds are sometimes a bit too ‘preset’-like.

Conclusion: Ultra Arcanum deals with an interesting sound, which is however hard to seize, but the main aspect is that the global production has to be improved.