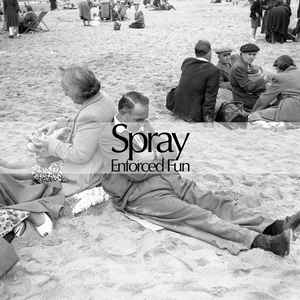 Background/Info: Spray is a British duo I discovered in 2002 when they released their debut album “Living In Neon” released on Ninthwave Records. A second album “Children Of Laser God” got released in 2007.  Jenny McLaren and Ricardo Autobahn who in a former life were members of The Cuban Boys are now back on track unleashing their third full length.

Content: The opening cuts clearly sound into dance-pop music. It’s a kind of ‘warm summer’ music on the edge of commercial dance music. This is the kind of well-crafted pop music with simply, carrying tunes that will bring you instantly to dance.

The second part of the work reveals a more interesting content, which is less ‘commercial’-minded. There also is a dub-minded cut, but the main part consists of more traditional electro-pop songs. It still feels ‘summer-like’ getting you in a happy mood, but in the end this is also what this kind of pop music stands for.

Notice by the way that Spray invited several guests to join in on a few cuts. One of the most surprising guests is Hollywood actress Jane Badler who’s featured on the intro-cut. One of the most familiar names is Hyperbubble, which is another electro-pop driven band.

+ + + : The global production reveals a high qualitative sound resulting in cool songs. I like the diversity from the album and especially the evolution from a more typical dance-pop style towards classical electro-pop fields. The song “The 80s Never Died” featuring Phil Fletcher and DonQuibeats sounds pretty vintage-pop like and is the best cut from the album. This is a pretty accessible electro-pop release.

– – – : Spray moves on the edge of commercial dance-pop music and that’s a kind of grey zone that will not convince all electro-pop lovers. The sound is pretty contemporary, but I’m afraid it will rapidly suffer from the weight of time.

Conclusion: If you’re in search of well-crafted dance-pop music that will appeal for a wider audience and make your friends dance during a warm Saturday night garden party, Spray will be your best friend.

Since you’re here … … we have a small favour to ask. More people are reading Side-Line Magazine than ever but advertising revenues across the media are falling fast. And unlike many news organisations, we haven’t put up a paywall – we want to keep our journalism as open as we can. So you can see why we need to ask for your help. Side-Line’s independent journalism takes a lot of time, money and hard work to produce. But we do it because we want to push the artists we like and who are equally fighting to survive. If everyone who reads our reporting, who likes it, helps fund it, our future would be much more secure. For as little as 5 US$, you can support Side-Line Magazine – and it only takes a minute. Thank you. The donations are safely powered by Paypal.
Tags: Spray