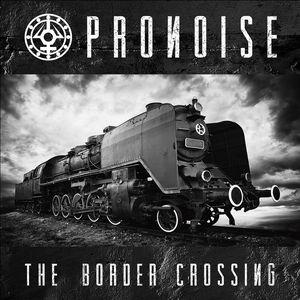 Content: Pronoise was set up in the late 90s by 2 Spanish artists from Valencia. The main idea was to bring music genres like EBM and post-punk together. They released a debut album, but the band was then put on hold. The was reactivated a few years ago now and has finally achieved their new opus revealing 9 songs.

“The Border Crossing” is a mix of pure new-wave based elements –which mainly comes through in the guitar- and bass parts, and electronics. The work has been clearly influenced by a dense flavor of 80s music. The opening cuts are easy listening pieces without real highlights. I enjoyed listening songs like “Dangerous Games” and the somewhat more electro-minded “Rapture (They Won’t Care)”, but the harder cuts are bringing a little excitement to the work.

“Evil Machine” is carried by harder and more explicit guitar. “Hunting 2015” is in my opinion the best track for its perfect balance between cool guitar parts and the EBM-driven bass line. This song is quite interesting as the original version already appeared on their debut work “Low Light Vision” (1997). This song reveals interesting ideas and I regret there’s no more similar stuff featured on the album.

“The Border Crossing” is a fully accessible piece of work, which will mainly appeal to lovers of new-wave and cold-wave music. The music indeed sounds like merging different ideas while Pronoise becomes accessible to an international audience because of the English lyrics.

Conclusion: “The Border Crossing” is an honest piece of music without real depths, and no absolute high lights. This album symbolizes the comeback of Pronoise after a very long hiatus.