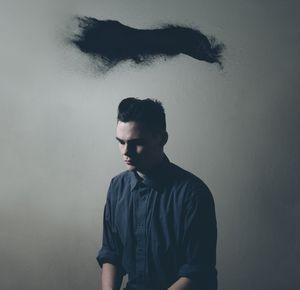 Content: Some of you maybe know the band Lebanon Hanover, which is a duo featuring bassist and singer William Maybelline. This artist now set up his solo-project under the Qual moniker.

The sound of Qual is somewhat bizarre, like bringing us back to distant years of electronics and EBM. You here and now will perceive some 80s influences, but the main part of the songs evoke early 90s EBM. I have to admit that the first few songs didn’t really impress me, but quite progressively it all starts to get more exciting.
There’s a dark and somewhat desperate mood hanging over the songs. Some melodic synth layers accentuate the deep melancholic state that this album has been made of. The vocals couldn’t convince me right in the beginning, but here again it all gets better after a few tracks. I can’t say that there are potential hits featured on “Sable”, but songs like “Flay” and the harder “Benevolent Technologies” both are efficient cuts reminding me of the cool EBM acts of the early 90s.

The dark and repetitive “O’ Ornate Spade” perfectly represents Qual’s sound creation. It sounds dark and often slow like accentuating the desperate aspect of the composition. It even moves into a kind of horror vision on “Putrid Perfumes”. I honestly prefer the somewhat harder cuts like “Rip Doth Thy Scarlet Claws”, which is a nice apotheosis for a surprising album.

Conclusion: I can’t say that I became totally wild on this work, but Qual brings some good-old electro elements from the early 90s back to life with a unique and desolate approach.