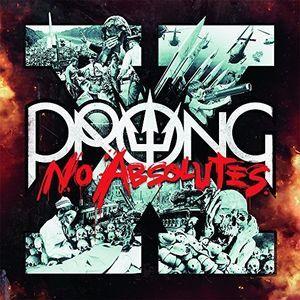 Background/Info: “X-No Absolutes” is again produced by Tommy Victor himself, with Chris Collier as a co-producer, who also collaborated on the “Songs From The Black Hole” all-covers album.

Content: Expectations were high after “Carved Into Stone” and “Ruining Lives”. Both were full of the raw Prong energy the fans have come to know and love.
On this album between them Tommy and Chris polished Prong to shine brightly; at the same time making it loose some of its idiosyncrasy. You could also call it “broadening Prong’s sonic horizon” of course.
“Do Nothing” is the culmination of the polishing. Let’s hope it’s the closest Prong will ever get to a ballad.

+ + +: The musical, technical, mixing and mastering prowess on this album is overabundant. This is one well-made metal/hard rock album.

Conclusion: This rather short (45 minutes) album can gain Prong fans from a younger more mainstream audience. Long-time fans might feel the album to be rather soulless; missing the grit; the rawness; the sharp edges.

Since you’re here … … we have a small favour to ask. More people are reading Side-Line Magazine than ever but advertising revenues across the media are falling fast. And unlike many news organisations, we haven’t put up a paywall – we want to keep our journalism as open as we can. So you can see why we need to ask for your help. Side-Line’s independent journalism takes a lot of time, money and hard work to produce. But we do it because we want to push the artists we like and who are equally fighting to survive. If everyone who reads our reporting, who likes it, helps fund it, our future would be much more secure. For as little as 5 US$, you can support Side-Line Magazine – and it only takes a minute. Thank you. The donations are safely powered by Paypal.
Tags: prong