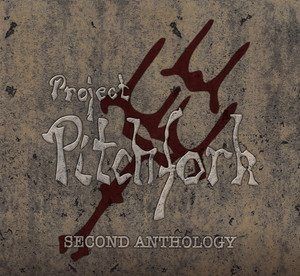 Background/Info: There are bands that simply belong to the history of a music genre. Project Pitchfork definitely is one of them! This album has been released 5 years after “First Anthology”, which started with their debut album “Dhyani”. That was exactly 25 years ago so this “Second Anthology” is a kind of celebration, which covers the past 14 years of the band.

Content: Peter Spilles is a demanding artist who doesn’t satisfy himself by just selecting a number of songs to put it on CD. The selected songs have been re-mastered and a few ones were even re-worked and sung again.

There also is an extra surprise as the opening song “What Have We Done” is a pretty cool previously unreleased cut, which sounds in the purest tradition of the band. And the song “The Dividing Line” has been sung together with Sven Friedrich from The Dreadful Shadows.

A total amount of 33 songs have been selected and the least I can say is that this “Second Anthology” is once again a fully accomplished and sensational work. Songs like “Rain”, “Acid Ocean”, “Beholder”, “Feel” or some of the newest ‘hits’ taken from the “Blood” album will bring you the true spirit of this unique formation.

The sound of Project Pitchfork remains pretty faithful to their early basis, but the production has simply improved throughout the years. Spilles is an artist who has created a very own sound and a unique electronic style. I think that’s the reason why there are not many ‘copyists’ of Project Pitchfork. Peter Spilles has this deep, growling and powerful timbre of voice while his sound is dominated by bombastic rhythms, dark-blasting sound treatments and wonderful melody lines. Project Pitchfork remains faithful to real ‘synthesizer’ music and his work has been always accomplished by beautiful synthetic melodies.

Moving in between powerful compositions and simply beautiful, evasive songs, Project Pitchfork can now make you dance and next lead you on a wonderful voyage. That’s why the sound is also totally appropriated for soundtrack music.

This is a beautiful release, which is also available as a strictly limited edition with extra fan material.

+ + + : Project Pitchfork remains a band with a very personal and solid sound. The production moves in between power and reflection while the lyrical content of the work has been always driven by reflection and commitment.

– – – : When you look at their discography you for sure will find a few songs missing on this album and I’m also referring to some collaboration with great artists like Sara Noxx and Unheilig;

Conclusion: Both ‘anthologies’ together create a fantastic testimony for future generations. But I’m sure that Peter Spilles still has a lot of creative ideas to exorcise and transpose into beautiful songs.