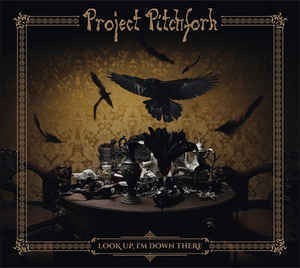 Background/Info: Twenty five years after their official debut album “Dhyani”, which became an instant success, Project Pitchfork is back on track with a new opus that has been announced by Trisol as one of their most important releases to date. Peter Spilles and his acolytes featuring old servant Dirk Scheuber –who previously this year took the world by surprise unleashing a brilliant solo-opus, accomplished 12 new songs.

Content: Globally speaking the new album reveals the most familiar elements of a good Project Pitchfork album. There still is the hard and impressive bombast, which you mainly can hear in the rhythm sections next to the reverie synth parts and subtle piano arrangements. Project Pitchfork once more excels in bringing opposite elements together, which finally results in a harmonious and mature writing.

One of the main strengths of the songs remains the carrying chorus lines. Project Pitchfork has this fine taste to create carrying and somewhat wave inspired melody lines. You now and then will notice an industrial touch, but still hard and merciless EBM passages. “Look Up, I’m Down There” can be evasive and next hard and merciless. That’s a bit comparable to our daily life, which remains an important source of inspiration for the lyrical themes. The lyrical content remains another important aspect of the work and I especially like the kind of symbolism and metaphoric approach.

+ + + : “Look Up, I’m Down There” is one more accomplished album for Peter Spilles. It’s probably not his best album ever although one of the best from the past few years. The music mixes power and evasive passages while always carried by solid choruses. I like the symbiosis between rough drum sections and refined piano arrangements. I also have to mention a terrific EBM bass line running through “Titânes”, which is for sure one of the most surprising cuts of the album. This album will ravish all the fans of the band.

A last, but essential aspect of this album is the great artwork. The gothic-like front cover is absolutely great and artistic and that’s an aspect you’ll never get on digital format.

Conclusion: Project Pitchfork remains a very single sound experience in dark electro underground music and this album is there to remind us why this formation belongs at the top for years now. This is definitely one of the major releases from the end of 2016!

Since you’re here … … we have a small favour to ask. More people are reading Side-Line Magazine than ever but advertising revenues across the media are falling fast. And unlike many news organisations, we haven’t put up a paywall – we want to keep our journalism as open as we can. So you can see why we need to ask for your help. Side-Line’s independent journalism takes a lot of time, money and hard work to produce. But we do it because we want to push the artists we like and who are equally fighting to survive. If everyone who reads our reporting, who likes it, helps fund it, our future would be much more secure. For as little as 5 US$, you can support Side-Line Magazine – and it only takes a minute. Thank you. The donations are safely powered by Paypal.
Tags: EBM, Project Pitchfork, Scheuber, Trisol