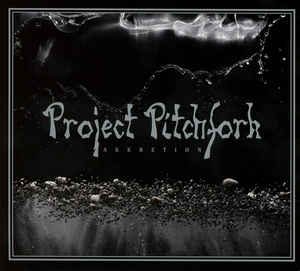 Background/Info: Peter Spilles assisted by Dirk Scheuber and Jürgen Jansen are back on track adding one more album in the impressive Project Pitchfork discography. The album is available as standard edition and as limited edition featuring an extra disc with an exclusive song and some remixes plus a book.

Content: When I discover a new album of Project Pitchfork I know in advance what will be the main ingredients. Even if that sounds ‘predictable’ it also is what we expect from the Project Pichtfork sound. It’s comparable to your favorite dessert, which you simply want to taste like it always tasted. And for “Akkretion” it means the familiar heavy drum sections featuring the usual bombast, the dark atmospheres hanging over the songs, the carrying melody lines and the typical, growling and charismatic vocals of Spilles.

This album doesn’t sound that different from what we’re used to hearing although some tracks are a bit softer and sometimes cinematographic-like.

+ + + : Project Pitchfork is a band without real surprises, however each time again and again the band seduces its audience. That’s because of this easy recognizable sound DNA and Peter’s unique timbre of voice. You directly know it’s Project Pitchfork and even after all these years of commitment, there’s no single band doing this better than Project Pitchfork itself! Some of the songs reveal a softer side, which is a bit more pop-driven, but it still is a fully accomplished piece of music with a few outstanding songs. I’m referring to “And The Sun Was Blue” and “Ascension”. The lyrical content of this band always has been very different and I’ve to say Peter Spilles here again convinced me by a sort of space-like existential themes.

– – – : The softer side of the album might be also seen as the single point that will maybe not convince some of their fans. I’m not sure this is the kind of album that will go down in history as one of their major releases.

Conclusion: Project Pitchfork is not reinventing their sound, but has just polished a few elements getting the work softer and sometimes pretty refined. A diamond can be never enough polished to glow…

Best songs: “And The Sun Was Blue”, “Ascension”, “Gravity Waves”.

Since you’re here … … we have a small favour to ask. More people are reading Side-Line Magazine than ever but advertising revenues across the media are falling fast. And unlike many news organisations, we haven’t put up a paywall – we want to keep our journalism as open as we can. So you can see why we need to ask for your help. Side-Line’s independent journalism takes a lot of time, money and hard work to produce. But we do it because we want to push the artists we like and who are equally fighting to survive. If everyone who reads our reporting, who likes it, helps fund it, our future would be much more secure. For as little as 5 US$, you can support Side-Line Magazine – and it only takes a minute. Thank you. The donations are safely powered by Paypal.
Tags: Project Pitchfork, Scheuber