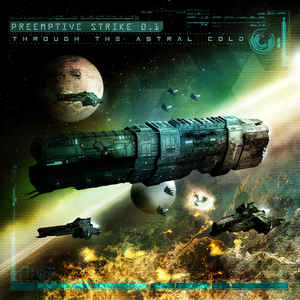 Background/Info: PreEmptive Strike 01 is back on track unleashing their sixth album to date. It’s an important work as it marks the band’s move from Infacted Recordings to Digital World Audio, but it also was their first new opus after the release of electro-metal minded EPs. Should the Greek formation go on exploring the wider fields of metal music instead of the dark-electro approach, which got them recognized in the scene?

Content: The answer to my question comes quite rapidly after the first notes and sequences. The band holds on to their familiar dark-electro and EBM influences leaving the metal experiments behind. The songs are made with fast sequences and melodic leads. The vocals remain harsh and somewhat spooky-like. The songs are once more moving in between EBM and dark-electronics.

But PreEmptive Strike 01 always likes to do something special. They this time joined hands together with Schwarzblut (signed to Alfa Matrix) for one song, which resulted in an epic sonic experience. The work reveals a few more epic elements and other mystic chants.

+ + + : PreEmptive Strike 01 confirms their great writing skills and it would have been a pity they should have taken some distance with the dark-electro work. This is what they’re doing the best and the growing maturity of the band is an easy noticeable aspect on each new work. That’s an important evolution you can hear in the balance between powerful sequences, dark bass lines and melodic leads. But the production of the vocals became more professional as well. They also like to work with other artists and the collaboration together with Schwarzblut on “Phantom” is a really a successful one. “Killing Protocols” sounds a bit similar and this epic touch is absolutely great. Last, but not least I also want to mention the artistic and limited digipak/digibook format of this release.

– – – : The main thing I maybe regret is the rather similar sound formula, which is running throughout all the tracks. That might explain the metal experiment on previous EPs. The album features only 9 songs and I regret there are not one or two more songs on it. But on the other side I prefer a short, but successful work instead of an endless tracklist with less substance!

Conclusion: “Through The Astral Cold” confirms the great composing skills of this Greek formation while at the same time it also reminds us of the importance and talent of the Greek electro-underground scene!