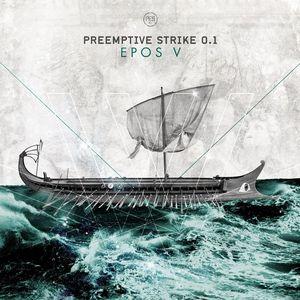 Content: PreEmptive Strike 0.1 has released their 5th full length. This band operating from the beautiful Crete Island started as a dark-electro formation, but progressively experimented with different genres. They walked on a metal-driven path at their previous EP (released by Sonic Hell Records) while their electronic sound got slowly infiltrated by elements of Greek folk music.

“Epos V” has been released 3 years after the “T.A.L.O.S.”-work and sounds like it is moving a step forward in the exploration of sound and traditional folk music. The opening song is an interesting surprise as it’s a cover version of metal-band Sabaton. I’m not familiar with this band and the original song, but the cover sounds like a mix of dark-electronics and epic arrangements. The melodic element comes rapidly through, which is a trademark of this formation.

The Greek folk input played by traditional instruments bouzouki and lyra is more noticeable than ever before. PreEmptive Strike 0.1 this way experimented with an element in sound not many bands in the genre ever dared to work with. It’s original, but it also injects a very own touch to the work. It’s an element you directly recognize and will link with the band. Another important aspect of their work is the melodic treatment. They always have taken care for great melodic passages, but this new work moves a step further as well. The melody lines are constantly getting back creating a balance with the folk input.

So where’s the dark-electro side? You can hear it in the stumping rhythms, the dark sound treatments and growling vocals.
The opening part of “Epos V” reveals multiple enjoyable songs although they’re maybe a bit similar to each other. “Act V The Death Of Talos” also sounds a little similar and I here especially like the accentuated epic passage.

“Antropophagus” featuring Black Altar sounds totally different and a bit like a wink tot their metal-minded EP “Pierce Their Husk”. You’ll discover hard metal-minded guitar riffs mixed with electronics. This is the other side of the band and it’s an interesting aspect of their creativity, which will maybe become the path of the future.

The last part moves back to their familiar electronic side and the usual elaborated melodies. But PreEmptive Strike 0.1 will take you again by surprise as they invited the singer of Endanger to perform in German on the cover of Sabaton. I didn’t expect such a version, but I have to admit it makes sense and the ‘Endanger’-version is absolutely great. Last, but not least the Italian melody-makers of Syrian contributed to this album as well. They made a remix of the song “Epos Of The Argonauts”, which also is the final cut of “Epos V”.

Conclusion: I like the progression in sound of PreEmptive Strike 0.1, which since their “T.A.L.O.S.”-CD became an original mix of dark-electronics and Greek traditional folk music.