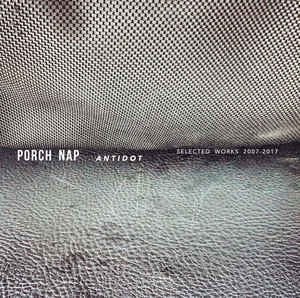 Background/Info: Porch Nap is a Russian artist hailing from St. Petersburg. Busy exploring acoustic sound treatments and transforming all kind of noises into sounds; Porch Nap has released a few productions on Fulldozer Records (Russia). This album is a selection of tracks that were originally composed in between 2007 and 2017 and which have been reworked while featuring multiple guest artists.

Content: Porch Nap is one of those noise surgeons, collecting sounds and noises that will be next manipulated and transformed into a very experimental- and abstract sound dimension. From long-during and somewhat irritating sonic waves to repetitive electronic loops to dark noises “Antidot” also reveals a kind of primitive technoid approach.

+ + + : If you like pure sonic experimentation and improvisation, this is the kind of album that will for sure catch your attention. It all remains an extreme listening although quite diversified. I especially like the somewhat techno-driven “Non-Linear Bass Metronome” and the more accessible “Granular Liminal Beat” feat. Alexei Borisov. This is for sure an opportunity to discover a rather unknown Russian artist totally devoted to experimental sound arts.

– – – : Some sequences are pretty repetitive and becoming irritating after a while. That’s also because of the improvised format of this production, which will for sure remain accessible for a restricted number of listeners.

Conclusion: Porch Nap is without a shadow of a doubt one of the most experimental artists I’ve been invited to discover on Zhelezobeton. I can’t affirm to be fan of such experimental artists although I’ve to admit this album has been preceded by a lot of efforts and sound treatments.