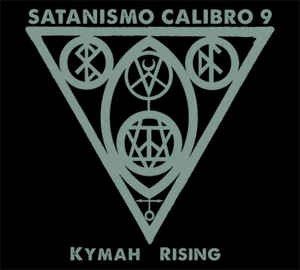 Background/Info: Satanismo Calibro 9 was set up in 2005/2006 as a solo-project of ‘Doktor Pery’ while it rapidly became a real band over the years. The Italian combo hailing from Milan has released a considerable number of works over the past 10 years and distinguished themselves from the rest by a poignant ritual inspired sound.

This new opus is the final part of the so-called “Rising Trilogy”. ‘It does complete a path through Isis and Typhon to the androgynous archetype of Kymah.’

Content: If you’re familiar with the sound of SC9 you’ll immediately recognize the ritual character of the music. There’s no real intro, this album directly leading the listener into a kind of disturbing atmosphere created by evil voices and industrial cellar sounds. The sound vibes literally resonate through your body. It feels a bit like being an assistant to an exorcism, which is maybe symbolizing an exorcism of the band’s darkest thoughts…

The atmosphere is extremely dark and sometimes desperate-like, but always empowered by monstrous sounds and strange, anguishing vocals treatments accentuating the ritual format of the work. Some sound loops are pretty repetitive, which here again only reinforces the ritual influence.

+ + + : SC9 are experts in the composition of ritual music, which they define as ‘infernal-industrial’. It’s not only about the overwhelming sound treatments and obscure atmosphere, but also the treatments of the vocals. All voice sources have been seriously manipulated and reworked to create this haunting feeling. “Kymah Rising” is an album you have to discover when played at a higher volume and/or by using headphones, which will only increase all possible sensations.

– – – : Some of the repetitive passages are not exactly boring, but they could have been a bit more diversified.

Conclusion: If music is often meant as a way of entertainment and joy, Satanismo Calibro 9 stands for a dangerous experience and the ultimate exposure of dark-music. “Kymah Rising” is the latest sonic-creature of this possessed formation.