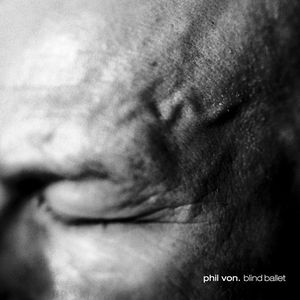 Content: Phil Von (the famous front man of Von Magnet) also likes from time to time to release a more intimate solo-work, which creates some distance from the familiar and successful Von Magnet.

Behind “Blind Ballet” hides an interesting conceptual idea about a blind man and the interaction of sounds/noises around him. We’re entering a strange and often mysterious sound universe, which remains pretty quiet, but a little less paranoiac. If you try to switch off your sight while hearing the minimal and somewhat abstract arrangements of this work you rapidly feel some anguishing vibes.

From the mysterious guitar parts on “Bleeding Caress” to the deep vibrating bass blasts, joined by spooky whispering vocals on “Chip Chop” to the somewhat ritual and sacred-like passages of “Taire,” to the industrial and haunting sonic corridors of “2 Lovers For 1 String,” to the field recordings running through “Feu,” and “Without Wings” you experience the bizarre creation of this “Blind Ballet.” It clearly appears to be a minimal, and total ambient experience, which will absolutely leave an impression on you.

It’s not the most accessible work of this genius artist although it is an interesting and diversified experimental exposure and the imaginary union between human senses and noises. Speaking for myself I prefer the tracks driven by a low cadence and reinforced by intriguing atmospheres, but I’ve to admit that the experimental parts of the work titillated the imagination. In the end I would say that “Blind Ballet” is a rather eclectic work, which cannot be totally considered in only one particular genre.

Conclusion: “Blind Ballet” is an interesting concept, on which the mental picture provoked by simply the strength of sounds will lead you to experience a totally imaginary story.