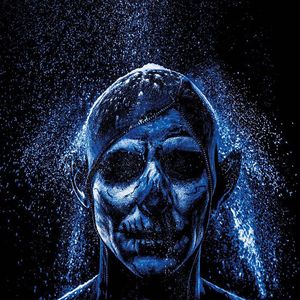 Content: I consider Glenn Keteleer as one of the best Belgian sound wizards of the past few years. The man released an impressive number of great releases that earned him a serious reputation. That’s for sure a reason why he contributed to the recently released new album by Neon Electronics.

This new opus by Radical G takes off in a rather experimental way. You rapidly notice the techno-input, but the first songs all remain pretty quiet. “Kong” also shows the EBM inspiration, which comes through in the solid bass line. This song also reveals great vintage and somewhat spooky synth layers while the song progressively moves towards a danceable and minimal EBM apotheosis.

I like the progression in the tracklist, which becomes harder and more danceable. But before focusing on the harder passages I have to say a word about “Canned Hunting” revealing Keteleer’s commitment against this horrible practice. The song remains pretty quiet and mainly animated by a spoken speech about this practice although it sounds pretty minimal EBM as well.

We next get a few songs that reveal outstanding sound treatments and terrific bass lines plus some paranoiac bleeps (cf. “Red Cove”). The bass line running through “Jabba’s Palace” reminds me somewhat to The Chemical Brothers while globally speaking this song also moves into EBM inspiration.

“Mankind” needs a ‘bang’ and that’s precisely what comes through on “Flood,” which is the beginning of a great 2nd half. The sound manipulations are absolutely terrific while the song is also characterized by an amazing and somewhat trance-minded break. This track is a cool appetizer for the upcoming “Kryptonite”, which is an absolute hit song. I think that Glenn Keteleers will convince the last skeptics about his potential and knowledge as a sound wizard. This track is a divine mix of techno and EBM with an extra dark flavor on top.

The last cuts remain harder and danceable while constantly carried by terrific sound arrangements. There already is a great break in the midst of “Fury (Original Mix)” while the vintage touch comes back on “Love Ain’t Fashion (Original Mix).” The last song also is the only one featuring vocal parts while a big kick will drive you to dance like a mad.

Conclusion: “Mankind” reveals a great progression from quieter- towards harder and ultra danceable stuff. Radical G confirms its potential and growing talent in the manipulation of sounds and the creation of a real powerful techno-body hybrid.