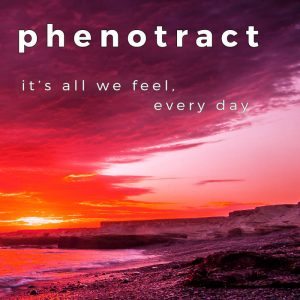 Background/Info: This is the fourth full length released by Eric Shans. Phenotract does not release new work on regular basis, but it’s a band I kept in mind for its evasive approach in electronic music.

Eric Shans is used to working with female guest singers and that’s again a part of this work while you also will hear sweet male vocals as well. There are also a few instrumental songs, which matches with the cinematographic format.

+ + + : Phenotract definitely stands for a unique vision and composition, mixing different influences with each other. It’s not exactly ambient work or pop music. The cinematographic label is probably fitting the best with the content. And I can assure you this work reveals a few noticeable cuts ion, which you simply can close your eyes, relax and dream away. The ‘film’-like orientation of “It’s All We Feel Every Day” became more explicit than what I’ve heard before.

– – – : The songs are sweet and smooth, but I’m missing some passion. This album has to be discovered in the right circumstances and a visual accompaniment would be a bonus.

Conclusion: It always is a pleasure to discover the work of Phenotract and that’s why I’m keeping this band in mind, but I have to say this is not the album I would recommend to discover the band with first.