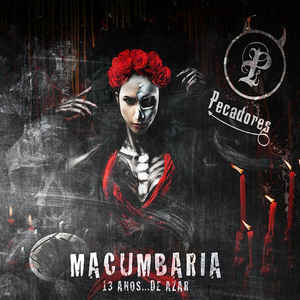 Background/Info: Brazilian dark-electro formation Pecadores released their debut-EP “Macumbaria” in 2005. The title song also got featured at their debut full length “10% For Jesus”. A second full length was released in 2010, but since then I didn’t heard that really new from this band. To celebrate the 13th anniversary of the debut EP, “Macumbaria” has been re-released with extra remixes, alternative versions and a few extra songs.

Content: “Macumbaria” probably is the best song ever composed by Pecadores. It’s pure dark-electro driven, sung in Portuguese and carried by a real great chorus. The first four tracks are exactly the same as on the original work.

We next get a nice bonus featuring 9 tracks. Most of the songs are remixes of the title song by Marcelo Gallo (Pitch Yarn Of Matter), Jesus Complex and Nahtaivel plus a few other versions such as a guitar remix from 2018, the first mix edit and demo from 2005.

+ + + : It’s quite interesting to see how an old song from this band still makes sense today. I think it has been more popular in the band’s homeland than here in Europe, but this EP is food for DJ’s so I’ll not be surprised to see a successful resurrection from “Macumbaria”. The original Wehbba-remix remains a very efficient version as well. There’s no better way than this EP to (re)discover Pecadores. The CD-edit has been limited to 100 copies, but really is a great artistic format.

– – – : I think the global sound quality could have been more professional although it creates a rough and unpolished effect.

Conclusion: It’s a bit strange to celebrate this EP 13 years after the original version, but dark-electro heads will be ravished dancing and shouting on “Macumbaria”.

Since you’re here … … we have a small favour to ask. More people are reading Side-Line Magazine than ever but advertising revenues across the media are falling fast. And unlike many news organisations, we haven’t put up a paywall – we want to keep our journalism as open as we can. So you can see why we need to ask for your help. Side-Line’s independent journalism takes a lot of time, money and hard work to produce. But we do it because we want to push the artists we like and who are equally fighting to survive. If everyone who reads our reporting, who likes it, helps fund it, our future would be much more secure. For as little as 5 US$, you can support Side-Line Magazine – and it only takes a minute. Thank you. The donations are safely powered by Paypal.
Tags: Nahtaivel, Pecadores