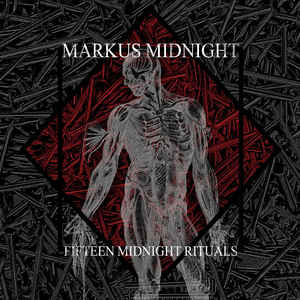 Background/Info: Hailing from Edmonton, Canada, Markus Midnight has already been busy composing music for several years now. Less material has been released and yet this album is a kind of ‘compilation’ featuring tracks that were written in between 2009 and 2017.

Content: I can’t remember to have heard of Markus Midnight before so these 15 songs are an excellent opportunity to discover the electro-wave approach of Markus Midnight. The music is inspired by 80s sounds and reinforced by cavernous vocals. The tracks are mainly electro-like, but still accomplished with guitar play. The music sometimes reminds me of a sonic hybrid between Data Bank-A and The Neon Judgement with Suicide in the background.

+ + + : The dark 80s touch is pretty cool and totally matching with the grave timbre of voice. This is great retro-like music and I especially want to recommend “Naked Midnight” for its raw, Suicide-like flavor. If you’re into electro-wave you for sure are going to  like the synth lines running through this opus.

– – – : You can hear this album is a compilation; the songs are sometimes pretty different from each other. I’m not that fond of the few less electro-driven songs (like “Your Devil”). I’m missing a true hit on this album.

Conclusion: Markus Midnight was a cool surprise. It sounds like good-old electro-wave and yet this artist has something very personal. I hope to hear new stuff from this musician.

7 Trending EDM Songs That Will Help You Study Better