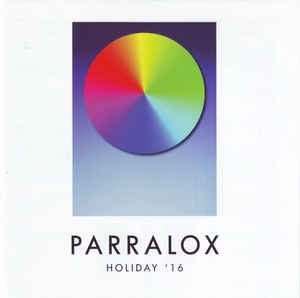 Background/Info: Set and driven by John Von Ahlen the Melbourner based Parralox became a familiar and recognized formation on the electro-pop horizon. After “Holiday ‘15” the band released a new opus on, which they bring an ode to some of their favorite bands. John Von Ahlen and Louise Love have accomplished 14 new covers from some legendary 80s tracks.

Content: Pet Shop Boys, Echo & the Bunnymen, William Higgins, Cicero, The Twins, Depeche Mode (2 songs), The Human League (5 songs), Sparks and Heaven 17 have been the sources of inspiration to release this work.

Parralox adapted the original versions into their own electro-pop approach, which is composed with mainly analogue gear and even the use of the famous Buchla modular synthesizer. John Von Ahlen and Louise Love both sing and sometimes as a duo. The band often reminds me of The Human League and I guess it’s not of a coincidence if this formation also appears to be one of their favorite ‘victims’.

+ + + : “Holiday ‘16” sounds hotter and more exciting than “Summer ‘15”. Working on covers of some legendary bands like the Human League, Depeche Mode, Echo & The Bunnymen and co is not an easy thing, but Parralox has the skills to transform most of the original versions into a very own and successful approach. “Flamboyant” from Pet Shop Boys became a great song, which even sounds a bit The Human League-like. The comparison with The Human League is nothing new although it has been never so true. “Louise” and “The Lebanon” both have been meticulously reworked. It all sounds like Parralox feels the true spirit of the original version to bring them to life in a refreshed version. The songs are characterized by great sound treatments and driven by talented singers. The song “Blasphemous Rumours” (Depeche Mode) is my absolute favorite. It reveals great sequences and a somewhat EBM-flavor while it remains faithful to the original spirit of the song.

– – – : A few songs are not as interesting and I think it’s all about making the right choice. “A Question Of Time” (Depeche Mode) and Zero As A Limit” (The Human League) are not that much worse, but just less credible.

Conclusion: Parralox has found a cool- although not a new concept to bring old standards back to life. It definitely indicates the main sources of inspiration and gives the opportunity to younger fans to discover old electro-pop anthems!

Best songs: “Blasphemous Rumours”, “Bring On The Dancing Horses”, “Heaven Must Have Sent You Back To Me”.