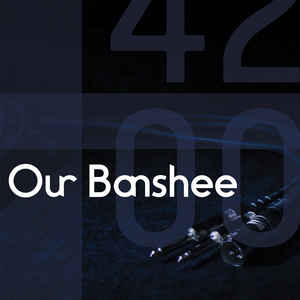 Background/Info: Our Banshee is one of the newest signings on Dependent. The band seems to have been set up a while ago, but because of other involvement nothing really happened till now. The band features Agi Taralas (Greece) and Stefan Böhm (Germany). Böhm is a recognized and talented artist who got involved with bands such as Pzychobitch, S.I.N.A., Mono No Aware and of course Nullvektor. “4200” is the band’s debut full length.

Content: This album sounds clearly inspired by electronic-pop standards and might appeal to lovers of Mesh, Beborn Beton, Rotersand and Informatics. It’s a refreshing piece of work mixing melancholic tracks together with harder EBM-influences songs. The songs have been accomplished by empowering guitar playing, injecting a touch of wave-pop.

+ + + : The opening song reminds me of the cool “Accidents In Paradise” from Informatics. It sounds pure pop-like, but with this extra refreshing flavor on top. But this album is quite diversified, mixing different elements and emotions. Now into melancholia and next inciting you to dance, Stefan Böhm confirms to be a musician with an open-minded spectrum. I’ve a preference for harder cuts while I also like the delicate arrangements the songs have been accomplished with. From raw and analogue-like sound treatments to astral sweeps and solid bass lines this album also reveals a great singer, which can compete with more recognized electro-pop singers from this scene.

– – – : Our Banshee doesn’t stand for ‘traditional’ electro-pop, but it’s sometimes easier to be a Depeche Mode-clone instead of a band striving for originality. Therefore “4200” needs a few listenings before you can really seize the essence and beauty of the work.

Conclusion: Dependent Records once again confirms to have a nose for original and talented formations. Our Banshee is maybe not the ‘hottest’ newcomer of 2017 although it will ravish electro-pop lovers in search of something ‘different’.