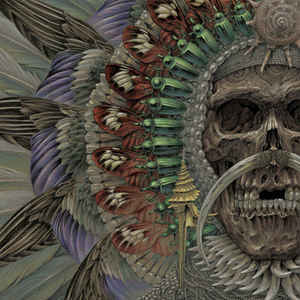 Background/Info: Ortega is a band from The Netherlands, which started terrorizing the underground scene since 2007. The band remained rather unknown to me, but I now had the opportunity to discover this new opus featuring 5 tracks. “Sacred States” has been released on different labels. The Belgian Consouling Sounds released the CD-format, Narshardaa Records the vinyl and Tartarus Records a cassette edition.

Content: Ortega sounds hard and merciless mixing different sound elements together. There’s an explicit industrial-rock touch, but still a more doom-metal inspired basis. I sometimes get the impression of hearing an offspring between early Swans for the industrial bombast and Godflesh for the metal/industrial-driven guitar riffs. The harsh and enraged vocals totally match with the sound aggression you’ll be exposed to when listening to Ortega.

Some passages are a bit slower in cadence, but you can hear some inhibited power behind the music. And when the power comes through again you get the impression of entering an industrial hell room.

+ + + : The album only features 5 songs, but the elaboration and progression is absolutely amazing. “Crows” holds you in its grip for more than 18 minutes revealing the multiple influences running through this work. “Maelstrom” is another recommended song, which also is an appropriate tilt for this heavy sound experience. I think it’s the kind of track that will please Godflesh lovers.

– – – : The extreme character of the album is not directly appealing for a wider audience. It’s not typically metal-like and industrial-minded in the widest sense of the work. Ortega will catch the attention of a very selected target of music fans.

Conclusion: “Sacred States” is a demonic piece of music where power and darkness have joined hands to terrorize the listener. No doubt about it there’ll be some lustful subjects that will fully enjoy this kind of torture!