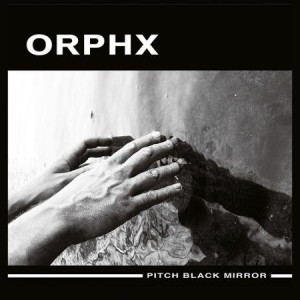 Background/Info:  Rich Oddie and Christina Sealey better known as Orphx are back on track. The Canadian duo is already active for 23 years now and has made a noticeable evolution in sound. While the earlier work definitely was into experimental and harder industrial fields they progressively -and especially during the past years, evolved towards a more technoid approach. That’s for sure the reason why this new opus has been released on Hands (CD) and Sonic Groove (vinyl). It also is their first full length in 5 years while they released several EP’s on Sonic Groove.

Content: The duo operates as genius sound architects transforming dark loops into an industrial-techno style with some elevating trance passages. “Pitch Black Mirror” sounds as the ultimate fusion between techno- and industrial music. A few acid manipulations can be noticed as well while a bouncing kick and broken rhythms carry the composition.

The production has been accomplished by a few spoken vocal parts and sampled passages. “Zero Hour” sounds a bit Suicide-like, but in a more industrial-rave style. You’ll also notice great sweep and crescendo sound waves getting you in ecstasy. The last cuts are a bit more evasive and even moving into pure cinematographic style.

+ + + : Orphx is one of those visionary formations that have perfectly filled the gap between ‘traditional’ industrial music and intelligent underground techno music. This album confirms this modern vision of industrial music. Next to this avant-garde writing the duo also confirms their great writing skills to manipulate original sounds into irresistible new tones and harsh noises.

– – – : There are several great songs, but maybe not one absolute ‘hit’. The main difficulty for Orphx will probably to convince conservative industrial freaks hating all kinds of technoid tricks and matters.

Conclusion: Orphx is back with an astonishing piece of progressive industrial music, which can be also labeled as industrial-techno. F*** the stamp you want put on it, “Pitch Black Mirror” simply is one of the best albums of 2016!