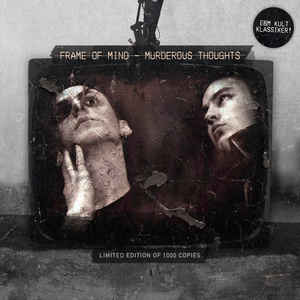 Background/Info: Frame Of Mind was a German duo consisting of Michael Friedrich and Marko Hein. They were active during the late 80s and early 90s dealing with EBM. Two songs were released for the “Body Rapture”-compilation, which back in time was a famous sampler released on Zoth Ommog. This sampler featured legendary formations such as Leather Strip, Armageddon Dildos, X Marks The Pedwalk, Aircrash Bureau, Bigod 20, Brigade Werther, Tribantura ao. The band next worked on a debut album, which never saw the light of day. The songs have been now recovered and released on CD format for the very first time for the “Classics Series” on Infacted Recordings.

Content: This album is a somewhat different edition in the “Classics Series” as I can imagine a lot of EBM lovers never heard of this band before plus “Murderous Thoughts” reveals a major part of previously unreleased material.

Frame Of Mind composed a complex and dark electronic canvas. You’ll hear some industrial sound treatments and the classical samplings.

+ + + : “Murderous Thoughts” is a fascinating experience in sound and I’m sure this band really had the potential to become a leading formation in the early 90s EBM genre. They didn’t compose the classic and somewhat cheap format of EBM, but a complex and well-crafted sound supported with overwhelming atmospheres and ghost-like vocals. There also is a great use of industrial noises. This album is pure lust for all 90s EBM lovers while this album features several noticeable songs. No doubt about it this is the most original edition in the “Classics Series”.

– – – : Frame Of Mind never gained the status of the other Zoth Ommog bands and that’s a real pity because they had the talent to break through.

Conclusion: Frame Of Mind sounds like a lost EBM treasure that has been reactivated and the good news is that they’re busy working on new material, which is announced to be released in the near future.