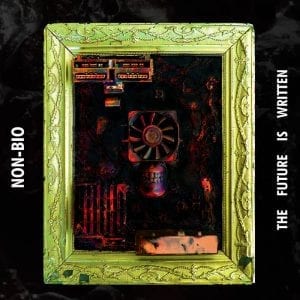 Background/Info: London based Howard Gardner started making short films, animations, and music videos for other people till he decided to compose his own music under the Non-Bio moniker. A few self-released and promising productions saw the daylight and we here welcome a new album featuring 14 tracks.

Content: Non-Bio moves back to its industrial music approach, but “The Future Is Written” definitely stands for a sonic transformation. It’s not just hard-banging industrial music based upon distorted sounds and noises, but Non-Bio still moves on creating cool sound treatments. The songs are sophisticated, joined by guest vocalist on one of the songs and ending with furious, hard tracks.

+ + + : Some of the tracks remind me of Test Department, but then transposed into a contemporary and technological approach. The songs are well-crafted, dark, driven by alluring industrial loops and heavy, bouncing rhythms. There’ also is a noticeable evolution in the tracklist, which crescendo reaches a furious final part.

– – – : “The Future Is Written” is not exactly reinventing the industrial genre. It’s sophisticated, but you’ll not be surprised. From a very personal point of view I think it could be interesting to inject more vocal parts –in a kind of exclamation- or propaganda-style.

Conclusion: Non-Bio reveals an interesting and accomplished industrial work. This band deserves a wider recognition and has the potential to sign on a leading industrial label.

Best songs: “Facial Recognition”, “We Own Your Memories”, “Distraction”, “Nourish”, “You Reborn”.