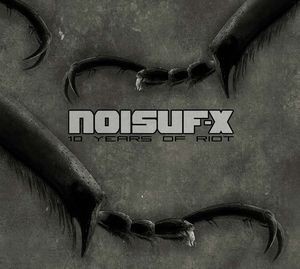 Content: Noisuf-X without a shadow of a doubt belongs to my personal favorite bands of the past several years. I consider Jan L. as one of the most inspiring artists active in the wide fields of dark-electronics. He dared to innovate by mixing pure trance & rave influences together with a dark-electro basis.

The title of this work speaks for itself; this is a kind of celebration for 10 years of ‘riot’ and commitment. It brings us back to the early years of Noisuf-X and the electro-industrial minded album “Antipode”. I personally consider the EP “Tinnitus” (2006) as the most revolutionary release of this project as it was the basis for the real sound of Noisuf-X. This ‘sound’ is characterized by harsh, pumping beats, furious bass lines, icy technoid leads, multiple sound manipulations and the typical spoken and exciting samplings.

These ‘best of’ moves back to “Tinnitus” and to all of the albums that have been released thus far. The songs are like in chronological order opening with songs of the “Antipode” (2005) album and ending with songs from last year’s released “Invasion”. A few songs have been reworked and presented as a different mix. I like the idea, which makes it not simply sounding like a ‘best of’, but giving an extra to the fans of the band.

The main disc features 19 songs and I’m sure we all have our personal favorites, but I can assure you that the biggest hits of Noisuf-X like “Tinnitus”, “Hit Me Hard”, “Orgasm”, “Noise And Bouncing”, “Clubhit”, “Warning” and “The Typical Fuck You Song” are part of this sonic orgasm called Noisuf-X! I personally expected a bit more out of the new “Tinnitus”-mix, but on the other side, there are some real cool alternative mixes of other songs as well.
This album simply reminds us of the genius of Jan L who’s an artist with a sublime sound DNA.

The bonus disc features 14 extra songs and here again I was positively surprised. Don’t expect the usual load of remixes, but simply a selection of demo songs (from 2015), unfinished demos, unreleased demos and unreleased songs from the early years. It all looks like a great gift, but still a cool discovery. The four “2015 Demo”-songs all are hard and hitting industrial-trance pieces. “Be A Doer” is an absolute smasher.

A next attention grabber is the sung version of “Warning” featuring Terrolokaust singer Javi Ssagittar. The power moves on with the really interesting “2013 Unfinished Demo” of “Hard Attack”. A few more unfinished songs of 2012 and 2013 are a little less interesting as you clearly hear that they’ve not been fully accomplished. On the other side there’s a terrific “2010 Unreleased Demo” of a song called “Goahead”. The title might give us an idea about a potential source of inspiration, but this is a cool techno-minded cut.

Last, but not least you also will discover some earlier, unreleased songs from 2005. You clearly can recognize the early electro-industrial influence of Noisuf-X, which was part of the “Antipode”-work.

Conclusion: “10 Years Of Riot” stands for 10 years of lust and numerous hits. I’m really wondering what the next 10 years will bring!