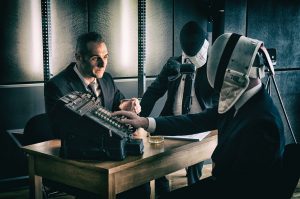 It always is something special when interviewing artists you know personally. It even becomes a bit tricky when you like the persons hiding behind the artists, but you don’t necessarily like their music. With Nine Seconds it’s totally different. They’ve released a new and simply great album entitled “Agent Provocateur”. It also is their first album on Infacted Recordings, which reveals a harder sound mixing EBM and electro-pop. I get in touch with singer Oliver Spring (ex-Sleepwalk), Thomas Kowalzik and René Ebner (both ex-No Comment).

Q: You guys are already involvement with music since quite a long time. So how did No Comment finally get in touch with the singer of Sleepwalk to set up Nine Seconds and what kind of sound did you’ve in mind when setting up the band?

Thomas: Rene and I made once a remix for the Sleepwalk track “Wheel Of Time’, so we did know Oli virtually. On the European tour we made with No Comment supporting Apoptygma Berzerk we then met in person. When I moved to Berne, Switzerland, I remembered Oli was living there and so we met for a beer. By then he had already left Sleepwalk and we started with recording vocals for his new project Tear!down. Since the chemistry between Rene, Oli and me was very good, we decided to go back to the roots. So we started NINE SECONDS as a project with 3 boys, that just want to have fun and create a mixture of EBM/harder electro-pop. Because this is the music we grew up with and which touches us most.

Q: You’re now active since a few couple of years. How do you look back at previous albums and how did you finally come to sign on Infacted Recordings?

Oli: We like all our albums, but it is hard nowadays to get attention as a new band, especially with the small record company we were signed to. So the next step was to get in touch with Torben from Infacted Recordings, who was immediately interested in NINE SECONDS.

Q: Who’s this ‘agent provocateur’ and what does the clip of the song reflect about the title and maybe lyrical themes you’re dealing with?

Rene: An agent provocateur is a double agent. For us this is just an impersonation of somebody that tells one thing, but does the other. There are lot of agent provocateurs around today, Trump for example follows an own agenda. The world is full of fake news and the people who spread it are not stupid, they also follow their own agenda, like an agent provocateur. So basically the song is about honesty and how you can proof trust.

Q: I experienced “Agent Provocateur” as your hardest album to date and in a way a bit like you reinvented your sound. What’s your impression about this evolution and what have been the possible sources of inspiration?

Thomas: With No Comment we made the typical evolution every EBM band makes from hard electronics to synth-pop to guitar-pop, and we try to avoid this for NINE SECONDS. So we always try not to sound too soft and since you think “Agent Provocateur” is our hardest album I think we did well (laugh).

Q: Sound-wise “Agent Provocateur” is moving on the edge between EBM and electro-pop, which in a way (and only for the influences) is a bit comparable to the early years of No Comment, don’t you think? But how do you see your evolution as artists all over the years?

Thomas: You’re completely right, since the old No Comment records like “Drawback Infect” were our reference, when we created NINE SECONDS. And since we made all this artist evolution with No Comment before, we don’t need to prove, that we’re able to write a catchy pop song. For us it is more important – since we’re getting older – that we are still able to record a kick-ass electro-track.

Q: Thomas and René, you’re now making music together for about 30 years, right? What makes the chemistry between you both and how does it feel working with Oliver today? What brings the future?

Rene: Yes, that is right, we know each other now for more than 40 years, when we started playing football in the same club and make music for more than 30 years. So I guess, we’re friends. With Oli it has not changed, we’re just 3 old boys with the same music taste, no one has a big ego, and we have fun together. Since bands often fail because of personal problems we were sure, this is not going to happen with NINE SECONDS and that is why we started it.

Thomas: The only discussion we regularly have, is when it comes to football, Oli hates the teams we support, but since our teams mostly win, Rene and me are happy with that.

Oli: Rene and Thomas are just suppressing all the defeats of their teams, but I remember them all. So I’m happy, too.